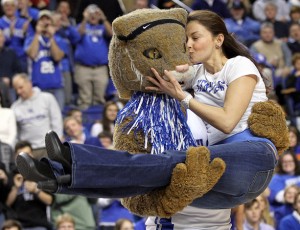 March Madness is upon us, and as we flick on the TV and colleges campuses all around the country fill up the bleachers with screaming fans, it seems only fitting to take a look beyond the court and see who is cheering these teams on. While the outfits of the fans can be fun to watch, it’s usually the furry friends that take center stage. I’m of course talking about the team mascot!

The school’s mascot says a lot about the spirit and enthusiasm of a team. They are the ones who help rile up a crowd and often have their name and face plastered all over a campus. So which mascots would the paparazzi be lining up to capture a shot of and which ones are a little, how do you say, out of the ordinary? From Wildcats to Trolls, Bulldogs, and Gophers, there are mascots out that will make you laugh, and some that will no doubt leave you scratching your head.

Let’s start with the front-runners of this year’s tournament and teams that are predicted to go far. Could you name their mascots? Do you think you’ve ever heard of them, or could guess if someone made you try? If not, here is your chance to catch up. Feel free to jot down notes—stump your friends with new trivia!

The Kentucky Wildcats. The University of Kentucky has enthusiastic and obviously athletic students. Their fans are often referred to as the Big Blue Nation. Wildcats are a popular mascot—Kansas State is also home of the Wildcats, but the obviously prefer purple and white!

Syracuse is another team that is on the “watch list” for this year’s games. They are looking fresh and are ready to roll, coincidently so is their mascot—Otto the Orange! It may seem odd, an orange for a mascot, but you couldn’t ask for a brighter or healthier friend to cheer you on!

The Missouri Tigers are also roaring and ready for ball time. The home of Gold and Black have fans that are almost as fierce as their players and are sure to bring some tiger heat to the court!

Have you ever been to North Carolina? If you have I’m sure you’re familiar with the North Carolina Tar Heels. Their mascot is big horned Ram, Rameses. He has big ram muscles, a jersey and a huge following of fans. If I must say so myself, he looks great in blue!

I’m quite partial to the next team. The Kansas Jayhawks. I’m a Kansas girl, and have a brother who went to KU. And if you must know I still walk around wearing my 2008 National Championship shirt. I’m a La Salle Explorer now, but that won’t stop me from loving the Jayhawks through and through.

So what other reputable mascots are out there? Well of course there are the Duke Blue Devils, the Butler Bulldogs, and another family favorite—the Georgetown Hoyas, with “Jack the Bulldog” as the mascot.

Some mascots aren’t as mainstream, in fact may not have ever realized what they were!

Trinity College is home to the Trolls.  And then there’s Whittier College, home of the Poets— Do you think they all have the gift of rhyme? Concordia College is home to the Cobbers. Their mascot is a human sized cob of corn, again a very healthy choice. You know for sure their students are getting their full serving of vegetables—whether they happen to be real or school spirit driven!  Stanford University doesn’t have an “official” mascot, but their adopted cheerleader is the Standard Tree.  It’s said that it even changes its leaves with every season!

Mascots can be the heart and soul of a campus, or just a figment of every student’s imagination. Whether your mascot is well known, or locally loved and cherished, each character or symbol tells a story and showcases a little of what makes your school unique! Here’s hoping we seen a wide range of these guys on the sidelines this March!