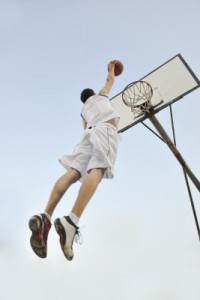 You know the amazing moment when you see one of your school’s basketball players in your classroom, walking by you in a building, or on the bus on the way to class? Imagine how much cooler that will feel when they get drafted into the NBA! Well, lots of current players—some among our favorites—went to college just like the rest of us, and some of them had surprising majors.

1.     Jeremy Lin
Even if you don’t like the Knicks, you’ve surely heard of a little something called Linsanity! Lin is my personal favorite NBA player, and this 23 year-old just so happens to be a Harvard graduate. The star-on-the-rise graduated with a degree in economics—which should be helpful as his salary goes on the rise like his fame.

2.     Steve Nash
The Phoenix Suns’ point guard has played professionally for 15 years. Before he made it to the big time, he earned a scholarship to play at Santa Clara University. Nash earned his degree in sociology. Is that why he’s so likeable?

3.     Chris Bosh
Power forward for the Miami Heat, Bosh’s talent didn’t keep him in college for long. He spent one season on the basketball team for Georgia Tech before entering the 2003 NBA draft. But in his short time at school, Bosh was part of an interesting major: graphic design and computer imaging.

4.     Andre Iguodala
The #9 forward guard for the Philadelphia 76ers attended the University of Arizona for two years, entering the NBA draft in 2004, though he initially intended to play at the University of Arkansas. While he quickly established himself as a top player in college, he also studied hard with his major of education.

5.     Roy Hibbert
Center for the Indiana Pacers, he was elected to his first NBA All-Star game this year. He graduated from Georgetown University in 2008 with a major of governmental studies. His high performance in leading the Hoyas to the Final Four in 2007, however, almost took him out of school; but being a good student, he returned for his senior year to finish what he started.

6.     Shaq
Though recently retired, Shaq will likely be forever a household name. The basketball player/rapper/movie star attended Louisiana State University where he studied business. Though he left college early, he still continued his education, even attending a broadcast journalism“bootcamp” at Syracuse University’s prestigious S.I. Newhouse School of Public Communications in 2009.

7.     Kyrie Irving
Point guard for the Cleveland Cavaliers, Irving is only 20 years old. Making a star debut for Duke University, he was the first overall pick in the 2011 NBA draft. Though he left college and his intended journalism degree early, the NBA star made a pact with his father to finish college in the next five years.

8.     Carlos Boozer
The power forward for the Chicago Bulls has seen plenty of basketball success, contributing to an Olympic Gold Medal in 2008 as a member of Team USA. But before the Olympics, he played for Duke University and studied sociology. He helped the team win the 2001 NCAA Championship.

9.     Deron Williams
The current point guard for the New Jersey Nets was drafted third in 2005 after playing for the University of Illinois for three years. Fittingly, Williams was majoring in sports management while he rose to college basketball fame, even leading the team to the NCAA championships in his junior year.

10.  Tim Duncan
Power forward for the San Antonio Spurs, Duncan began his career playing at Wake Forest University. He graduated in 1997 with a degree in psychology, and was drafted as the first pick that same year. The four-time NBA champion is a true star!