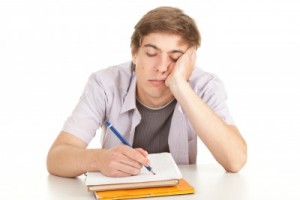 Have you ever taken a class that seemed too easy?  You’re breezing through it thinking, this seems too easy but no one said it was a blow off class.  Every school has their Rocks for Jocks or Emails for Females but… Stats for Frats?

I had this exact absurd experience while taking a summer intro statistics course at University of Kentucky.  After 6 hours a week for two months and a grand in UK’s pocket I earned a vague knowledge that there is such a thing as a ‘confidence interval’—and an A.

I happen to know that a couple of people in that class did learn something.  One of the girls was extremely ‘math-y’ and seemed to grasp the concepts and formulas easily.  Why does our transcript say we learned the same amount, when I am absolutely 100% sure that her stats knowledge is exponentially more useful to her future employer than mine, but how is that future employer supposed to know?

Maybe in your head you rationalize it thinking, a credit is a credit, right?

The academically adrift student finds themselves in a similar situation, semester after semester.  Whether it’s a light reading load, easy grading, assignments that can be done an hour before class, or exams that require minimal studying, it’s easy to see how classes—and their grades—can lose value.

A book named Academically Adrift: Limited Learning on College Campuses, found that across the nation, critical thinking skills and time spent doing homework have decreased sharply.  As you can imagine just from reading the title, the book caused a huge ruckus among the academic community.   As a student, the results, if true are sobering.

The data suggests that Universities, may be ‘turning and burning’, a restaurant term for getting customers in and out quickly, which in turn allows the wait staff to make more tips.  The level of service need not be wonderful, so long as food sales stay up, or in the University system’s case, student numbers.  In the coming weeks, I will talk to administrators, hiring managers and recruiting firms to see if their experience and data supports the statistics found in Academically Adrift.

“The value of a liberal arts college education — to you, to employers — is that you’ve spent four years in a place where you were forced to consider new ideas, to meet new people, to ask new questions, and to learn to think, to socialize, to imagine. If you graduate, you will get a degree, but if you are not a very different person from who you are today, then college failed.” – Jonathan D. Fitzgerald, Huffington Post blog