Our office had a pretty big laugh after stumbling across a recent article by the Center for Disease Control. I applaud the CDC intern that actually got away with publishing this tongue-in-cheek zombie apocalypse blog, and even more kudos to the boss who sanctioned it. However, I am a little concerned that the author gave some pretty lackluster survival tips–“i.e., Remember to bring your ID… find a safe meeting place like your mailbox.” This nonsense will guarantee you or you’re loved one’s demise; Who wants to be zombie chow? I certainly don’t.

That’s why I’ve had a zombie contingency plan prepared for several years. I know that sounds a bit ridiculous, and plenty of my ex girlfriends would have to agree, but I sleep better at night knowing I can jump out of bed at any second and get the heck out of dodge. And you know what my first plan of action is? Not waiting for the CDC to start an investigation or for the government/military to keep me safe! My words of wisdom: Prepare, Survive, Defend.

It is impossible to prepare for every scenario, but there are a few basics that will keep you alive for the initial outbreak. You must prepare yourself both mentally and physically. You have to realize a few facts: First, you won’t be able to save everybody. Realistically, you can only be responsible for yourself; your nine hundred Facebook friends are on their own. Second, this is not a game. There is no high score, but there is a game over if you lose. Survival usually means you’re a coward, granted you’re a really smart and very much alive coward. Lastly, you have to have hope. If you are whining the entire time and singing lame emo songs by the camp fire, go ahead and get yourself bitten. Only the strong survive, so start using that dusty treadmill sitting in the basement!

Pack enough gear to get yourself to safety; I agree with the CDC in this regard. Remember that you will have to be mobile and constantly on the move. You can have all the expensive equipment in the world, but in less you are taking a pack mule with you, you can’t carry it. Any experienced backpacker will tell you that it pays to invest in quality light equipment. I keep a 68 liter hiking backpack with all of my primary gear; they make larger bags if you are big enough to haul them. It is also smart to pack some secondary equipment in a large duffel bag.

Secondary gear would include larger items such as a tent, cooking equipment and fuel, climbing gear, radio, fishing pole and tackle, and more tools/weapons. You can abandon secondary gear if you have to, but it’s nice to have everything you might need. I purchased another, smaller backpack to give to a companion. You don’t want to be the only member of the group hauling all of the equipment, eventually becoming the slow one who gets bitten as your friends run away. There definitely is strength in numbers and duffel bags are hard to carry through rough terrain. I even bought a tactical hip pack, aka fanny pack, for my Black Lab–my dog isn’t becoming zombie fodder!

Instead of watching Zach Snyders’ Dawn of the Dead remake or Danny Boyle’s 28 Days Later, both of which are excellent Hollywood popcorn flicks, you should watch of few episodes of Les Stroud’s Survivorman (Bear Grylls is a joke and should stick to selling deodorant). Les “Survivorman” Stroud shot three seasons of educational zombie apocalypse preparedness footage and didn’t even know it! In case you haven’t seen an episode (if you haven’t, they are on the Netflix instant queue), Stroud ventures into the wilderness with nothing but a leatherman, a piece of beef jerky and camera equipment for an entire week; he is completely alone and shot every episode himself. Stroud teaches you the basics–finding a dry base camp, starting a fire, trapping game and finding edible fauna. A survivor’s mentality and the will to live are what will get you through the zombie apocalypse, not an emergency kit full of tools.

The great tactician Sun Tzu wisely stated that a warrior should know thy enemy in order to defeat them. The first thing you must assess is what type of zombie are you dealing with. Are they George Romero reanimated corpses or are they Resident Evil-esque intelligent, but rabid beasts? Or are you dealing with Invasion of the Body Snatchers aliens that infect and manipulate humans? In order to survive any of these situations, you will need to have tools to defend yourself.

If you are dealing with a brainless zombie horde, grab heavy firepower like your grandpa’s shotgun or you’re cousin Billy’s M4 assault rifle (thanks Congress for lifting the ban on military grade fully automatic assault rifles!). Find your nearest Army supply store, sportsman’s lodge, pawn shop or Wal-Mart sporting goods section and stock up on plenty of weapons and ammo. Stick to common caliber guns such as 9mm or 10/12 gauge so you can find useable ammo later on. Although shotguns are awesome close range, they take longer to reload than a pistol; you can keep spare 9mm clips in your pocket. Rifles are great if you find an elevated, defensible position. A scope won’t do you much good if you’re overwhelmed, but I don’t think zombies can climb ladders or trees. 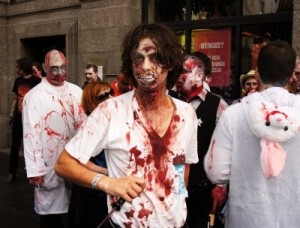 Are you dealing with intelligent zombies that respond to loud sounds a la Walking Dead? Break into your local Toyota dealership and steal a samurai sword. Seriously…that’s the award successful Toyota dealerships receive if they’ve hit their sales numbers (It will be located in a glass case in the lobby). A katana is the absolute best zombie deterrent–it has the range to ward off a multitude of undead, it is silent so they can’t hear you decapitating their zombie buddies and it never runs out of ammo! Are you a Chevy man and refuse to break into a foreign dealership? Grab a machete, axe or bat and try to break Barry Bond’s steroid infused home run record. Always remember that the safest course of action is to avoid action altogether. Fending off a herd of zombies might seem heroic, but turning into one isn’t going to get you laid.

Whatever the situation, you’re best best is to get the F outta town. If you live in a big city, get out! If you live on main street in middle of nowhere Kansas, get out! If you live in a double wide trailer down by the river, get out! You aren’t doing yourself a favor by sitting on your couch waiting to be eaten. Grab your gear and head to a safe location that is easily defendable (*more on that later) where you can lay low for awhile. Avoid major roads and highways; don’t try to pick up grandma that is sitting in the nursing home five counties over. I doubt she could have escaped the undead in her Rascal scooter. Interstates become congested in a matter of hours, think of rush hour where every man, woman and child is already twenty minutes late to work. Ever seen Independence Day? If you are sitting in traffic, the spaceship laser death beam will get you! Either that or you will be sitting in the exit lane for ten hours until your car runs out of gas and you are a sitting duck in the middle of nowhere. If you do have to travel quickly, grab a bicycle or if your ballsy, hop on a Harley; you can weave through traffic, but you’ll have to leave your Pomeranian behind.

I care about humanity’s survival, not just my personal well-being…well, that and I want there to be plenty of women alive to help repopulate the planet. That’s why I’m not geographically marginalizing any readers. Here are some excellent places to defend yourself after escaping the heavily infested zones:

Farm – Although MTV won’t admit it, the majority of the country doesn’t live on the Jersey Shore. Most have quick access to farmsteads that are still old-fashioned enough to have working wells, fenced in perimeters, heavy equipment and sustainable sources of food. A farm is probably the best meeting place a group could prepare for; it sure as hell beats your mailbox. A farm nested away from major highways and bigger cities is a great temporary location before you can move to something more secure.

Distribution Center – If you had to live the rest of your life holed up somewhere, it would be nice if it had everything you ever needed. That’s why it’s smart to research the nearest regional distribution center for big-box retailers such as Wal-Mart or Target. You can lock all of the shipping doors and barricade the few remaining entrances against the zombie horde. If you could survive long enough locked inside, you could become a merchant king in post-zombie apocalypse America. Food supplies will be hard to come by after crops go unattended, and you’re literally sitting on tons of canned goods!

Boat – It’s kind of hard to attack a boat if you can’t swim. There is a chance that some zombie variant would have the motor function to swim, but I really doubt it. Even if they could, just follow Styx’s advice and sail away. Georgo Romero and Pirates of the Caribbean zombies could walk across the ocean floor, so an island is less than ideal. I wouldn’t mind living on a nice yacht or battleship, heck even a big ass house boat. You can always move to a new location or dock on dry land if you need more supplies.

Prison – After a few months, the safest possible location would be a prison. Jails have the best security and the capacity to house a small community. You could grow crops within its walls and sleep well at night locked in your cell. The reason I say a few months is that you wouldn’t want to be the first person to move in with a bunch of convicted felons. Hopefully a guard lets everyone out. Worst case scenario, you have a lot to clean up before you settle in. A zombie horde might be able to overwhelm and knock over a fence, but they can’t push over a five foot thick wall of concrete.

I could easily write an entire book on this subject. If you are really interested, I know there are plenty out there to read. Instead, I’ll be training myself for the zombie apocalypse by playing survival horror video games while simultaneously riding a bike and screaming “bloody murder” at the top of my lungs. You don’t need to read scripture or create elaborate math algorithms to prepare yourself for the future. Just have the guile to do whatever necessary to survive.

Keeping it real, while keeping it safe.

One thought on “The Anti-CDC Zombie Survival Guide”