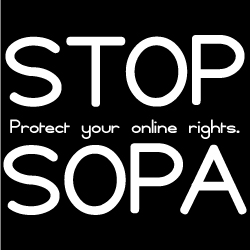 The hot topic for today is certainly SOPA.  Huge online companies such as Google, Wikipedia, Reddit, and Wired are protesting SOPA by blacking out their websites.  But what is it and why is everyone so pissed about it?

SOPA is the ‘Stop Online Piracy Act’ that is currently making its way through Congress.  It was introduced on October 26th, 2011 by Texas Republican Lamar Smith along with 12 co-sponsors.  The basis of the bill is to allow intellectual property owners (i.e. movie studios, record companies, etc.) to pull the plug on ANY websites they could make a copyright claim against.  So if a movie studio found that a website was illegally streaming one of their movies they would have the ability to request that Google remove the site from their search results, that PayPal stop accepting payments from the site, that all ad services remove their content from the site, and that the ISP prevent anyone from visiting the site.

Technically, SOPA was introduced to target overseas companies that are pirating content.  However, because the U.S. has no power to demand that those companies get shut down, SOPA plans to control content via U.S. operators.  That is where companies such as PayPal and Google come into play.  The government has no power to shut down a website run in Sweden, but SOPA would give it the power to tell Google (a U.S. company) that it is not allowed to show the Swedish company in their search results.

The wording of the bill is very broad and that is what has online technology companies so spooked.  The SOPA bill states that any site that “facilitates” copyright infringement could be taken down.  This means that if you upload a copyrighted photo to facebook and they do not have you take it down IMMEDIATELY that facebook could end up on the “Internet Blacklist” of websites that are being shut down.  If SOPA passed, within a week, the government could have cause to take down almost every single social network.  This obviously would cause mass turmoil and not have a good ending.

The ironic thing about the SOPA bill is that is simply would not work.  If you are a site that is truly profiting from pirated materials and you were shut down, all you need to do is buy a new domain and start right back up again.  That will simply not bring an end to piracy it will just make the companies pirating these materials that much more elusive.

At the end of the day, SOPA is simply a slippery slope that could easily end the era of free and open communication on the internet.  We agree that piracy is not cool and should be stopped, but this is certainly not the way to do it.  It leaves the door to censorship by the government way to open.  This bill has the ability to negatively affect any and all businesses and media outlets on the internet.  So now that you are educated on SOPA please do your part and head over to Google to sign the petition against SOPA!  And, if you are feeling extra passionate feel free and pass a letter citing your protest to your local representative.

After the worldwide protest against the SOPA bill Rep. Lamar Smith, the sponsor of the bill, made an announcement that he was postponing voting on the bill indefinitely. He stated that he still wanted to move forward with a piracy bill but that he would work with the major online companies to find the best solution.