Get your brackets ready and throw in your $20 for the bet. College Basketball season is in full swing and teams are preparing to position themselves within the rankings and brackets. Basketball fans all over the country look forward to this time of year! We have some info for you about both the men’s and women’s tournaments!

Men’s Basketball
Play-in Games & 1st round First round kicks off at the University of Dayton Arena in Dayton, Ohio. Tune in on March 15th at 6:30 and 9 p.m. then on the 16th at 6:30 and 9 p.m. to see which teams will win the play-in games and a spot in the tournament. These first 4 games can be seen on TruTV.

2nd and 3rd Rounds On March 17th and 19th the teams on the west coast will move to four different arenas in Denver, Tampa, Tucson, and Washington. East coast teams will play in Charlotte, Chicago, Cleveland and Tulsa on March 18th and 20th. This is a great chance to see rivalries and some great play. Now the teams know they are good enough to be in the tournament but have to be able to hold on to their spot long enough! Viewers can catch games throughout the days on CBS, TNT, TruTV, and TBS.

Southeast & West The southeast and west regions will go at it for a spot in the final four. Games will be held March 24th and 26th at the New Orleans Arena in New Orleans and the Honda Center in Anaheim. Viewers can catch games throughout the days on CBS, TNT, and TBS.

East & Southwest The east and southwest regions will go at it for a spot in the final four. Games will be held March 25th and 27th at the Prudential Center in Newark and Alamodome in San Antonio. Viewers can catch games throughout the days on CBS, TNT, and TBS.

Final Four This is the most highly anticipated part of the tournament by far! The four best men’s college basketball teams will battle it out on April 2nd at 6th and 8:30 p.m. The two winners will go at it for the NCAA title. The final game will be April 4th at the Reliant Stadium in Houston at 9 p.m. Both the Final Four and the Championship game can be seen on CBS!

Need a bracket? We have you covered. We found a bracket from ESPN.com

Women’s Basketball
1st & 2nd Rounds The ladies will battle it out to establish their spot in the tournament. First round play will begin March 19th and 21st in Albuquerque, Columbus, Durham, Knoxville, Salt Lake City, Spokane, Standford and University Park. Teams who advance to the second round will continue games on March 20th and 22nd in Auburn, Charlottesville, Cincinnati, College Park, Shreveport, Storrs, Wako and Witchita.

3rd Round The ladies teams who conquer their opponents will advance to Dayton, Spokane, Philadelphia and Dallas on March 26-29th.

Final 4 The most anticipated games will be held on April 3rd and 5th. Indianapolis will host the final four for the ladies. So, which team will come out on top? 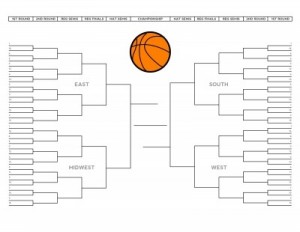 Need a bracket? No worries. We found one at ESPN.com! Check it out!