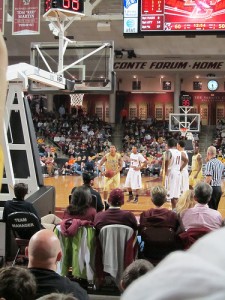 Facebook is not only used to stalk people you went to high school with and to keep in touch with current friends while in college.  Collegiate athletes have been using social media such as Facebook, Twitter, and YouTube to promote their games, to grow their fan base, and to communicate well throughout their team.

Aside from Division I basketball and football teams, college sports do not get too much recognition.  It is a sad sight when you and your team are all pumped up for a big game against a rival and you look at your stands and see only a few parents and maybe someone’s boyfriend.

To rectify this situation, getting the word out about your team on Facebook is one of the best steps to take.  Between 80 and 90 percent of college students are not only on Facebook, but also are daily active users.  Creating a Facebook event a week or so before that rival game and having everyone on the team invite their friends is a great way to sell those tickets.

Creating a Facebook page for your team is another great way to gain support.  Having a team member create the page and invite their friends, then have other teammates “suggest friends” to their friends could be a great way to keep fans involved.  Posting statuses bi-weekly or even daily about recent games would remind college students of the game on their Facebook News Feeds, which is a place they are known to look when using Facebook.

Twitter is another great promotional tool.  Having teammates tweet a link to the school’s athletic website is a great way to start, along with tweeting game information.

Within a team, creating a Facebook group is a step closer to great communication, and one step away from those pestering group text messages.  Ensuring that everyone has and uses Facebook is obviously essential before doing so.  Also creating the group based off of the roster is a must to guarantee no one is forgotten.

Finally, posting highlights on YouTube shows college students why they should go to your game.  Getting a parent or the school even to video tape a game and having a film student edit it into a highlight reel could then be posted to YouTube and posted on the team’s Facebook page, tweeted, and posted by teammates.

Good luck this upcoming season and best of luck packing those stands!