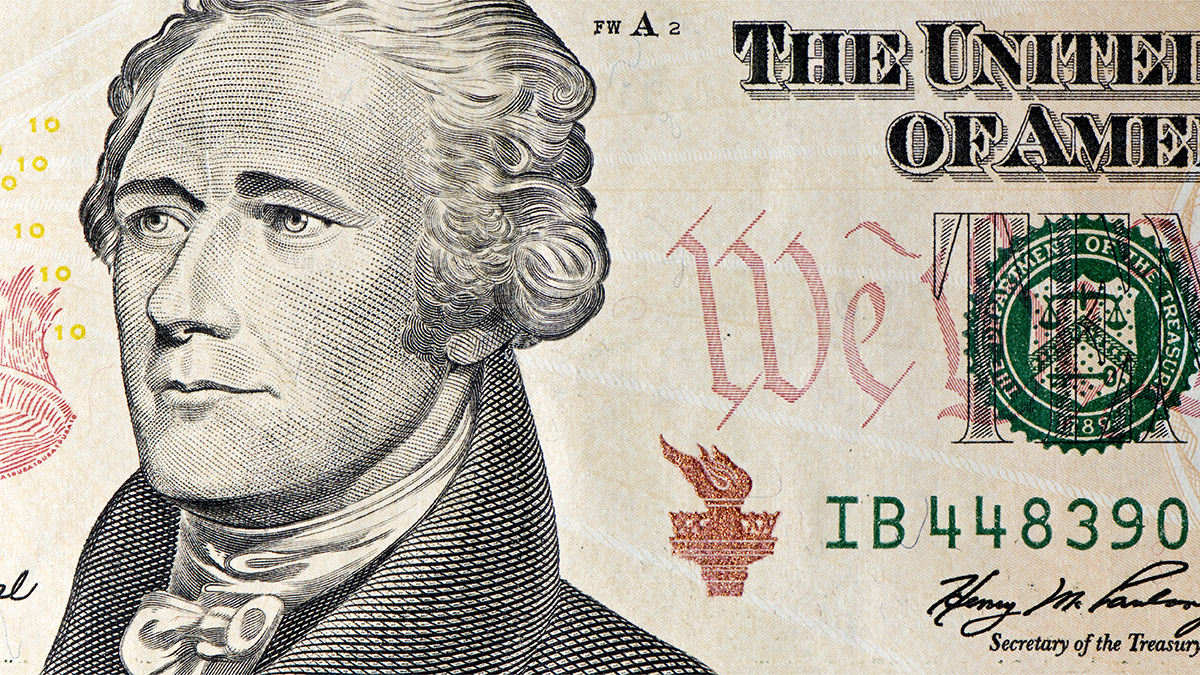 Alexander Hamilton was a statesman, politician, legal scholar, military commander, lawyer, banker, and economist who rose from obscurity to become one of the most influential Founding Fathers of the United States. He was the United States’ first Secretary of the Treasury, and is known for the creation of a national bank.

There’s a good chance you knew very little about Alexander Hamilton before he became the subject of the 2015 Broadway musical, “Hamilton,” written by Lin Manuel-Miranda. The story of “the ten-dollar founding father” isn’t widely taught, but is an important part of American history.

Hamilton overcame his tragic and impoverished upbringing and became a political legend in America by “working a lot harder, by being a lot smarter, by being a self-starter.”

Here are nine interesting facts you might not know about Alexander Hamilton:

1. We don’t know his birth year

Hamilton was from the West Indian Island of Nevis.

Hamilton frequently claimed that he was born in 1757 but official documents from Nevis list the year as 1755. Debate over this discrepancy has continued for more than two centuries, but modern scholars agree that Hamilton likely changed his birth year intentionally.

In 1772, Hamilton was sent to the American colonies to further his education. According to Ron Chernow, author of the biography Alexander Hamilton, “While applying to Princeton, Hamilton may have decided to ‘correct’ his real age and shed a couple of years.”

2. His writing got him to America

In 1772, when Hamilton was 17 (but telling people he was 15) the West Indies was hit by a horrible hurricane. Hamilton, who was working as a clerk, wrote about the hurricane in a letter that he planned on sending to his father. However, first he showed it to a Presbyterian minister named Hugh Knox, who was mentoring him.

Knox read the letter and was impressed with Hamilton’s writing. He encouraged Hamilton to publish it in the newspaper where Knox filled in as an editor. After the letter was published, several businessmen in St. Croix wanted to know the identity of the writer and when Hamilton came forward, they took up a collection to send him to America to be educated. Several months later, Hamilton was sent to New York where he enrolled in King’s College (which is now Columbia).

3. He led what is now the oldest army unit in the United States

In 1776, Hamilton was made captain, and under his leadership, it saw action in several key moments—including the Battles of White Plains and Princeton.

Fast Fact: How is George Washington related to Alexander Hamilton?

George Washington, after learning of Hamilton’s military success, made him an aide-de-camp (with the rank of Lieutenant Colonel) in 1777, eventually earning him the title of Washington’s right-hand man as Secretary of Treasury.

In May 1787, 55 delegates gathered in Philadelphia to address the deficiencies of the Articles of Confederation and the problems that had arisen from this weakened central government. Hamilton famously made a six-hour speech about his own plan for a strongly centralized government.

In October 1787, the first in a series of 85 essays arguing for ratification of the proposed U.S. Constitution appeared in the Independent Journal, under the pseudonym “Publius.” Addressed to “the People of the State of New York,” the essays (now known as the Federalist Papers) were written by the statesmen Alexander Hamilton, James Madison and John Jay, leading supporters of the Constitution and the strong national government it created.

Hamilton wrote no fewer than 51 out of 85 of these Federalist Papers, which are still consulted today by scholars and the Supreme Court today.

5. He passed the bar after studying for six months

After the war, Hamilton left his post as an adviser to Washington after holding it for five years and studied to take the bar exam. Hamilton took only six months to prepare for the bar exam. He passed and became a lawyer in New York City in 1782.

The majority of Hamilton’s first clients were the widely unpopular British Loyalists, who continued to pledge their allegiance to the King of England. When the Revolutionary War ended, many rebels returned to find their homes occupied, and sued Loyalists for compensation (for using and/or damaging their property). Hamilton defended Loyalists against the rebels.

In 1784, Hamilton took on the Rutgers v. Waddington case, which involved the rights of Loyalists. It was a landmark case for the American justice system, as it led to the creation of the judicial review system. In defending the Loyalists, Hamilton instituted new principles of due process.

In 1789, Washington was unanimously elected as the first president of the United States; he appointed Hamilton as the first secretary of the U.S. Treasury. Wanting to provide financial stability for the new nation, Hamilton argued for the importance of a national banking system and the federal government’s assumption of state debts. Hamilton’s financial policies faced strong opposition from James Madison and Thomas Jefferson, then secretary of state.

Chartered in 1791, the First Bank of the United States succeeded in fueling economic growth and marked the high point of Hamilton’s influence on the new nation.

Meanwhile, debate continued within Washington’s cabinet over the balance of power between the federal government and the states. By 1793, when war broke out between Great Britain and France, the divide between Hamilton (who favored neutrality) and Jefferson (who wanted the United States to back France) had begun to shape the nation’s first political parties, the Federalists and the Democratic-Republicans.

7. He helped his own political enemy become President

In the deadlocked 1800 presidential election, a House of Representatives controlled by the Federalists had two Republican candidates to choose from: Jefferson and Aaron Burr.

Hamilton wrote a private letter to a House member urging that Jefferson, Hamilton’s political enemy, become the next President. “Mr. Burr loves nothing but himself—thinks of nothing but his own aggrandizement—and will be content with nothing short of permanent power in his own hands,” Hamilton wrote. “In a choice of Evils, let them take the least—Jefferson is in my view less dangerous than Burr.”

8. His duel with Aaron Burr lasted over 15 years

Hamilton and Aaron Burr had been political opponents since the debate over the Constitution in 1789. Hamilton kept Burr from being re-nominated for Vice President. He also kept him from becoming Governor of New York.

Burr responded by challenging Hamilton to a duel.

Hamilton and Burr agreed to meet July 11, 1804 at Weehawken, New Jersey. This was also the site where Philip Hamilton, Alexander Hamilton’s son, had been killed in a duel three years earlier.

The night before the duel, Hamilton wrote his will, letters to friends, and finally a letter to his wife. The next morning, the two met at Weehawken at dawn.

Hamilton’s shot missed; in fact, some historians believe Hamilton never intended to hit Burr, but meant to “throw away his shot.” Burr’s bullet, however, mortally wounded Hamilton, who died the next day of his injuries.

9. His wife, Eliza Hamilton, dedicated her life to preserving his legacy

On December 14, 1780, Hamilton married Elizabeth “Eliza” Schuyler, the daughter of Revolutionary War general Philip Schuyler. They had eight children together.

In a letter to his wife dated July 4, 1804 (just days before his fateful duel with Aaron Burr), Hamilton wrote, “Fly to the bosom of your God and be comforted. With my last idea; I shall cherish the sweet hope of meeting you in a better world. Adieu best of wives and best of women. Embrace all my darling children for me.”

One of the ways Eliza found solace, and honored his memory, was to found two institutions in New York that supported lower-income children.

The Hamilton Free School, established in northern Manhattan offered education to students of families who couldn’t afford private education for their children. She also became a founder of the Orphan Asylum Society, the city’s first private orphanage, which built a facility that provided a home for hundreds of children.

Alexander Hamilton was a man both of action and of ideas. Most of all, Hamilton was one of America’s first great nationalists. He believed in an indivisible nation where the people would give their loyalty not to any state but to the nation. His economic, political, military, and diplomatic schemes were all directed toward making the nation strong.

Centuries later, the story of Hamilton’s legacy rose in prominence with the debut of the groundbreaking musical, Hamilton. In July 2020, a filmed version of the musical premiered on Disney+.