“Is that your cell phone or your living room TV?”

This is a taunt my Android using friend Jill is more than familiar with as a courteously remind her about the ridiculous size of her Samsung Galaxy at every football tailgate. Last week however, I had to eat those words as Apple jumped on the bigger is better bandwagon with the iPhone 6. Despite the larger breadth of the phone, all is not lost for those of us who prefer our technology compact. 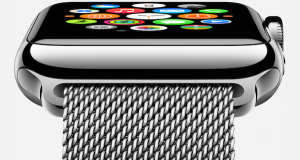 The big news out of Cupertino last week was the reveal of the much anticipated Apple Watch. Rumors of this device have been swirling on the interwebs for some time, but on September 9th Tim Cook unveiled the first new Apple product since the passing of Steve Jobs. A live demonstration showed many of the device’s functions which include access to emails and texts, the ability to control Apple TV, GPS through the Maps function and even a cool feature that tells you what time of the day it is. It would seem that the only thing missing is a line of piano wire needed to disable rival KGB spies à la James Bond. 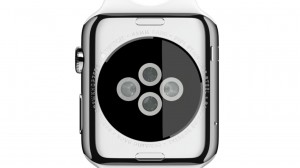 While these features already make the Apple Watch worth its $350 price tag, the item that most interested my wife and I was the watch’s functionality as a health and fitness device. The party starts with the set of sensors on the back of the watch that monitors vital statistics such as your heart rate. From there, Apple Watch comes with two apps built in to measure your liveliness. In the Activity App, three different aspects of movement are tracked on various rings. The “Move” ring reports how many calories you’ve burned for the day and alerts you when you have achieved your daily goal. Of course this comes in handy for strolls on the treadmill with your sorority sister in the student gym, but if you’ve ever inquired how many calories you burn walking to your daily classes or back from Penny Pitcher Night, you’ll now have a picture of just how active you truly are. Second is the “Exercise” ring which captures your rapid movements and alerts you when you’ve reached the widely recommended time of 30 minutes of exercise per day. Lastly, there is the “Stand” ring (seemingly geared toward us nine to five desk jockeys) which motivates you to do just that; stand for at least one minute per hour in a 12 hour period. 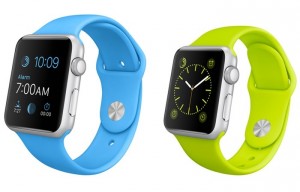 The Workout App allows you to select your favorite exercise and set calories and time goals for yourself. With just a swipe of the screen, the watch will give you up to date results on your current exercise campaign from the length of your run to the intensity of your yoga session. Once done, you can send your data to your iPhone’s Health App (Which we’ll have in tomorrow’s iPhone upgrade) as well as various third party fitness apps such as Lose It. 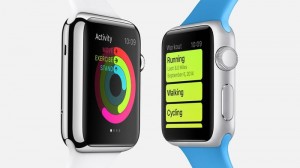 From late night White Castle runs to pizza for every meal, college is a hotbed for poor heath choices. Many of us enter our undergraduate careers feeling invincible, only to discover after graduation that four years of keg parties, fast food runs and passing the gym without batting an eye has taken a toll on our once trim physiques. Though we’ll have to wait a few more months to get our hands on this device as it won’t be out until early 2015, it certainly seems that Apple is giving us a prime weapon to battle the Freshmen 15 with.