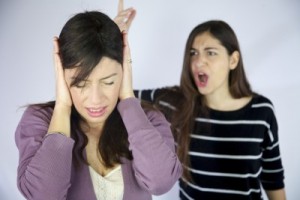 Odds are, in college, you’re going to find yourself bickering with a roommate. Two people can only be around each other for so long before they begin to argue. The best thing to do is to understand that these arguments are going to happen before they actually happen. Here’s how to be prepared.

A fight can cause a lot of drama between two people that have to live in the same room. Arguments may spark from the tiniest things. My roommates used to argue over the dishwasher.  One of them didn’t like how the other one placed their dishes to be cleaned. She would take the dirty dishes out and rearrange them to her content instead of yelling. This is a great plan, because if you’re the one being picky, you must also be the one to compromise.

I once got into a debate with my roommate over noise. She thought I was too loud and I thought she was too sensitive. This debate lasted all year long. She would go to bed at 10 o clock on a Saturday and then expect me to be quiet when I returned home. She would also sleep away most of her afternoon and expect me to be dead silent in the middle of the day. This fight could have ended sooner if we had communicated and formed compromises.

What happens if you have a fight with a roommate that isn’t over something as simple as your living habits? I mean a REAL fight. The best thing to do in this situation is to give each other space for a while to cool off. After you cool off, try talking it out. Place yourself in their shoes and try and see their point of view. Sometimes role playing can help you understand the other person better. If they don’t want to resolve anything, then it is out of your control.  Best advice then is to find a new roomie.

In conclusion, you’re most likely going to find yourself in conflict with a roommate at some point in the year. The answer to the problem is usually just communication and compromise. Try and stay calm and speak rationally, try to understand each other. Hopefully, your conflict can be resolved and you can live peacefully once again.