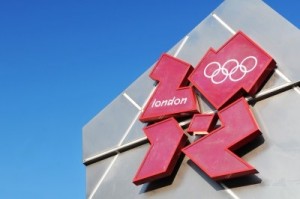 Unless you’ve been living under a rock for the past few months, you’re well aware of the hoopla surrounding London, the Royal Family—Will and Miss Kate included, and of course, the Summer Games.

Last summer I studied abroad in London. I spent three amazing months there and needless to say, it was hard to come home. I loved everything about it, from roaming the streets pretending to be Kate Middleton, to shopping on Oxford Street, and most of all, taking the tube to and from work every day (In addition to my classes I had a summer internship).

While I was there the city was well underway preparing for the Olympics. You could take tours of the event sites, some which were still under construction, and there was even a digital countdown in Trafalgar Square in anticipation of the summer to come. I was having a blast, but part of me was jealous. I came across the pond a summer to soon it felt like. Instead of living in the moment, London was fast-forwarding my time there and already looking ahead to the next big event.

I managed to get over my small twinge of Olympic jealousy and enjoy the rest of the summer. From copious amounts of tea, to lazy days in Hyde Park, it was a summer to remember. However, as I sit and reminisce of my London days gone by I can’t help but wonder, what would my time there have been like just one year later?
Here are things I would have loved, and some I’m glad I dodged.

For one, this year marked the Queen’s Diamond Jubilee. There was a huge celebration—and as I mentioned before, unless you’re living under a rather large rock, I’m sure you heard, saw, or read about it. The energy surrounding the event alone would be enough to make a London summer spectacular—not to mention if you got close enough to see any action! What a way to kick start the Olympic summer season. Anything remotely involving the Royal Family gets the city excited. You can smell the joy and tradition in the air.I would have loved to watch the commotion and join in the cheers.

As the games grow closer, I would have loved to be able to see the preparation for large amount of athletes, spectators, and tourists. When I was living there last summer, one of many preparations, was a huge apartment project under construction specifically to accommodate the large numbers expected to visit over the duration of the games. It was supposedly an “Ikea Village”, meaning everything was designed efficiently and to utilize the least amount of space while still being trendy and modern. The Swedish know how to use their space. These apartments would have been incredible to see—I would have taken note on how to maximize my school townhouse floor plan!

Now despite the energy, the cheering, and the pure thrill of being in any city for the Olympics (which I’m sure nothing can compare to), there’s one thing I’m glad I didn’t have to encounter.

Traffic. London is packed. It’s busy all the time. Add the Olympics into the mix and I’ll let you do the math. The tube, the streets, even the sidewalks are going to be a nightmare. If there weren’t designated sidewalk lanes before, now might be a good time to think about adding some. Travelers be prepared and have your traffic game face on.

Not a day goes by when I don’t secretly wish to be back in London, practicing my British accent and drinking tea, and the preparation and anticipation for all of the summer events, whether they be royal or Olympic in nature, have me wishing just a little bit harder. The Olympics are always fascinating and fun to watch, regardless of where they are taking place, but the fact that they’re in London this year makes it that much more exciting. I’ll be anxiously awaiting—and drinking tea, of course!