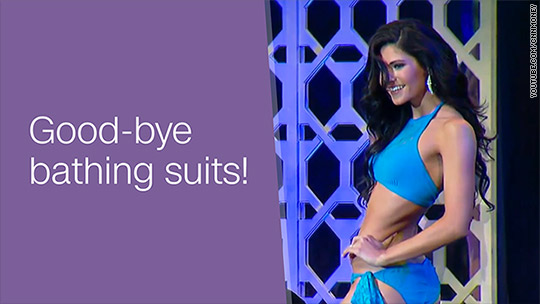 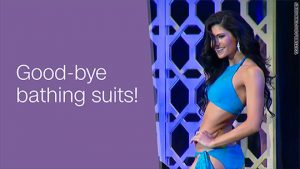 The Miss Teen USA pageant will no longer include the swimsuit portion. Instead, the contestants will be judged in a brand-new athletic wear competition. Over the past few years, the well-known pageant has been evolving and the stereotypical contestant has begun to fade. Miss Missouri Erin O’Flaherty will compete as America’s first openly homosexual contestant this year. The first hearing impaired contestant, Miss Pennsylvania Elena LaQuatra, will also be competing this year.

In order to justify the swimsuit category in the past, pageant officials have said it was to show off the athletic side of the contestants. However, that portion of the competition, for many young viewers, has instead focused purely on physical appearance. Young girls and teens in today’s generation have a high expectation for what their bodies should look like and the competition only adds fuel to the fire. According to the National Eating Disorders website, half a million teens struggle with eating disorders or disordered eating.

So far, the response to the new change has been overwhelmingly positive. Katherine Haik, the reigning Miss Teen USA told USA News: “This new direction for Miss Teen USA is a great way to celebrate the active lives that so many young women lead and set a strong example for our peers.”

Miss Universe president Paula Shugart shared in a memo that this shift is meant to “celebrate women’s strength, confidence and beauty” in a more positive way. “This decision reflects an important cultural shift we’re all celebrating that empowers women who lead active, purposeful lives and encourage those in their communities to do the same,” she wrote. Our hope is that this decision will help all of Miss Teen USA’s fans recognize these young women for the strong, inspiring individuals they are.”

It’s possible that the pageant will see an influx of competitors as parents may now be more open to the idea of their daughters competing. The change is also a smart business move. Former Miss Virginia Nancy Redd said: “Teens are spending .1 percent of their life in a bathing suit and 50 percent in athleisure. The pageant is following the trend of who can sponsor them.”

It’s nice to see the competition changing to focus more on who the girl is rather than what her body looks like. It’s time that women embrace their physical abilities rather than physical appearance and it also sends a positive message to young teens.