With the latest in mobile technology, tablets are now transforming higher education through multi-touch displays. Aside from social interaction, this technology can’t be ignored in hands-on learning, as they provide what most educators refer to as tactile and intuitive interface. In a 2012 Pearson Foundation survey, it’s revealed that tablet ownership among college students and college-bound high school seniors have tripled. Fast forward to 2014, you can now see students carrying multi-touch devices freely in campus. 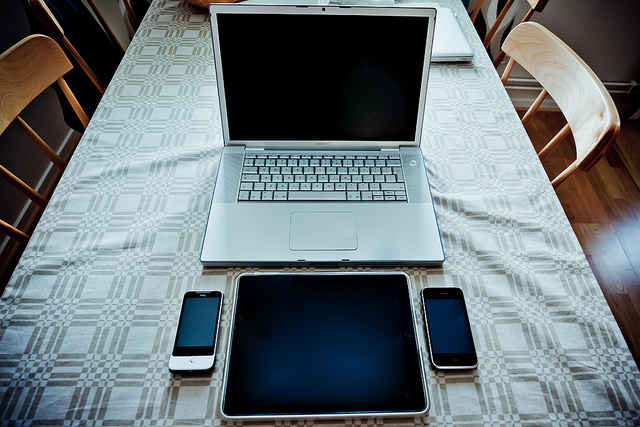 However, students tend to misuse them, exhausting it for non-scholastic endeavors. In this article, we’ll try to get rid of this idea by giving you valid reasons to integrate multi-touch screens in the classroom.

Despite the availability of tablets from Apple, Samsung, and Google, tablet technology still hasn’t reached its pinnacle. Multi-touch  has laid out its plan of a new interactive display that allows you to interact with real-life objects through the Enriched Reality. Reportedly, Enriched Reality is a series of displays, which detect every object it interacts with, including the ones placed on the system.

Ideally, you’ll be able to use your fingers, hands, and pens to navigate the Enriched Reality, which initiates a collaborative approach with your professors to shed light on a specific topic.

It also has networking capabilities, social media integration, and third party application hosting to continuously use your productivity apps.

“Learning is no longer just a linear process but one in which all information is connected seamlessly and visually, displayed on a high-definition screen,” Verizon Wireless wrote, stressing the importance of tablets in higher education. The article highlighted the importance of organizational applications, paving the way for a deeper way at which you can think and present information.

The company said that there are plenty of applications which you can use as a student presenter, wherein you’ll reinforce your class report with stunning film graphics, videos, documentaries, and games to engage with your classmates through play. Also, you can now communicate freely with them, as well as ask for initial assessments and evaluations.

Aside from Math and Science, Mark of Edudemic discussed the importance of a multi-touch device to help you excel in language classes. For one, there are digitized pens which you can use for writing, especially in getting all requirements done on the go.

Another reason is that most manufacturers have now equipped their devices with an advanced palm rejection feature. It allows you to rest your hands in the middle of the task, without necessarily affecting productivity. While texts and diagrams clutter on your screen, this feature still allows you to access movable icons of specific applications.

Going to college, especially abroad, is also equivalent to investment. Thus, you have to save enough money. While buying a multi-touch tablet is also a wise investment, the same Verizon article mentioned above said that they are less expensive than laptops. You’ll also get savings from e-books. For instance, you may resort to a Kindle alternative of Martin Tovee’s An Introduction to the Visual System, which costs $33.60, as opposed to the physical version costing around $130.

These devices are flexible – you can use it solely for classroom purposes or for entertainment. While reading a required e-book, students are still able to socialize through the social network integration to find encouragement.

Just like Multi-touch, Microsoft is also poised to release its own multi-touch and pen devices, which are based solely on Perceptive Pixel Technology. In an interview with Alex Williams of TechCrunch, Microsoft General Manager Jeff Han said that these devices will use pen and paper “to create what is equivalent to the human as the user interface.”

In the education system, Han pointed out that these devices are aimed to resolve user interface issues such as the “fat finger problem” (pressing multiple buttons due to large fingers). Whether in the classroom or not, you can still touch the displays for remote collaboration with your teacher and peers. This is in line with the true essence of Perceptive Pixel Technology – broadcast and geo-intelligence.

The good thing about multi-touch technology is that it improves every second, thus the chances of using it in the classroom has become limitless. Do you have other ideas on how to use this tech solution in class? Share your thoughts below.

As an online student, Kyle Albert has the knack of strategically using mobile devices in terms of collaborating with instructors and peers. For him, a tablet is a one-stop repository device, as it can replace a standard laptop on a number of ways. Reach Kyle on Google+.