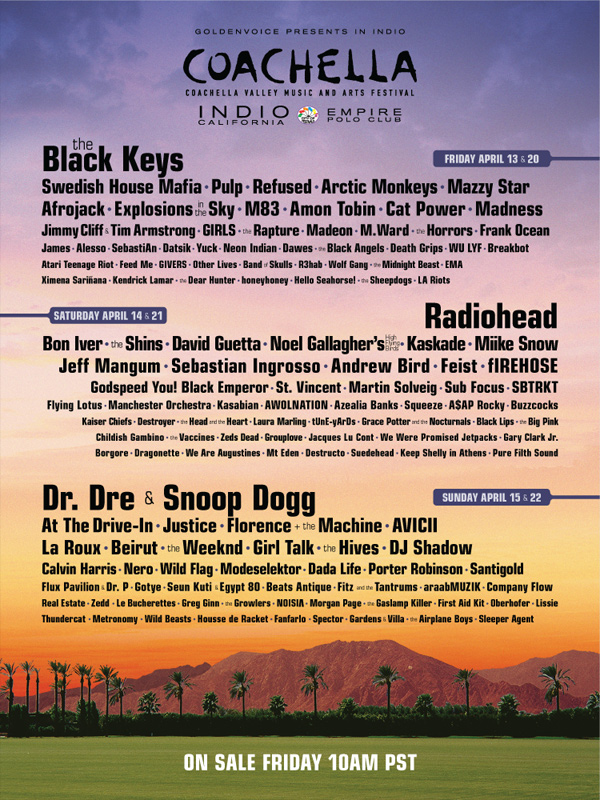 The Coachella Valley Music and Arts Festival is arguably the greatest music festival in the country. I had the pleasure of attending last year’s weekend extravaganza (you can check out my 2011 Coachella review here) and I can assure you that the Indio, California Empire Polo Club is one of the coolest venues I’ve ever been to. There are a bunch of bands that I’m really excited about seeing this year. I’ve asked around the office and got a few eCampus.com employees to voice their top picks from the 2012 Coachella lineup.

Amon Tobin was amazing at Moogfest. His show is an experience not just a concert.

The Weekend? Yes Please! He released mixtapes with a new R&B feel online and now a second tier headliner at Coachella in just one year’s time so you know he is good.

Childish Gambino aka Donald Glover from Community he sings, acts, and raps over Yeasayer, Animal Collective, and John Legend #hipstersdream.

Arctic Monkeys are hardly ever in the states and defined my first year at college.

Beats Antique is always a festival favorite and a must see if you just want to zone out and dance with friends (and check out hot chicks belly dancing/pretend like you are one of them).

A$ap Rocky – run to this music

Bon Iver – a lot of buzz don’t know if it would be a good band to see at a festival; this one will be interesting.

I’m really pumped that Refused and At the Drive-In are playing reunion shows. Refused put out one of the greatest punk rock albums of all time 14 years ago; they broke up shortly after their first album dropped. If you check out At The Drive-In’s Facebook page, they haven’t had a wall post since 2008. #veryexcite

I’ve been out of the indie scene since I graduated, but I’ll definitely catch the Hives, M83, the Big Pink, Beirut, Neon Indian, Kaiser Chiefs, Fitz and the Tantrums, the Shins, and Arctic Monkeys. I have no idea who a lot of these bands are…which makes me feel kinda old.

I listen to a lot more female heavy groups than I used to, so I’d like to see Feist, Lissie, Grace Potter and the Nocturnals, Santigold, and Cat Power. Two of my favorite shows last year were Erykah Badu and the Kills. Alison Mosshart from the Kills has more on-stage energy than Axel Rose on a case of Red Bull (Axel from 1989, not 2009).

Dr. Dre and Snoop Dog are the closing act this year? Kind of makes me upset that I got stuck with Kanye West last year. Oh well. The closing act normally has the best production value, so I’m really excited to see what Dre and Snoop pull out of their hats.

I’m so happy that great musicians are making it onto the Billboard charts. Compared to chart toppers from a decade ago (Backstreet Boys and Britney Spears), it feels like pop music is in a golden Renaissance period where the masses actually listen to good music. Take the Black Keys for example. Their new album is #3 on the Billboard Top 200; not because they sold out and made a few catchy radio friendly hits, but because they genuinely made a great record. On the other end of the spectrum you have Kings of Leon; whose last two albums are a pathetic, watered down version of their first three records. And guess what…they aren’t playing this year (they actually headlined over the Black Keys last year). #huzzah

I just love Florence and the Machine. Florence Welch is unbelievably talented; she makes VH1 divas look like a 14 year old boy who just hit puberty. Bon Iver and Andrew Bird are also great vocalists; I’m very excited to relax in the beer tent and catch their sets.

There are tons of great House, Electro, Dubstep, and Mash-Up acts at Coachella this year. The great thing about Coachella is that there are three completely separate stages for electronic music. You can catch bigger acts like Girl Talk, Miike Snow, and DJ Shadow or you could just hang out all day at the small stages and listen to groups you never even heard of.

I’ve been a Radiohead fan for years and have never seen them play live. I know they are doing a U.S. tour this year, but most shows sold out within 24 hours. Thom Yorke is one of the sexiest men alive, so I’m going to try my best to get within the first 10-20 rows (just to bask in his aura of greatness).