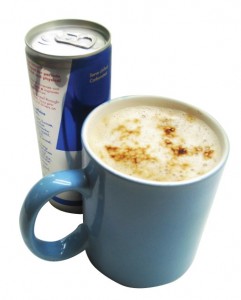 When we think of military-grade performance enhancers, secret trials in the desert come to mind, cover-ups, and maybe a sprinkle of spooky side effects, but you might be surprised to learn that the focus of cognitive enhancement studies for soldiers is none other than caffeine!  As college students, how can we use this knowledge to our advantage?

A quick survey of classmates and coworkers revealed an astonishing discovery—most people don’t consume caffeine regularly.   The aversion to drinking caffeine regularly is logical in the sense that you might think that when you really need it, say during finals, your pinch hitter will be out of the game with a sore shoulder.  Furthermore, caffeine is rightly labeled a drug, and as such has side effects and warnings.  Perhaps illogically, these same students had no problem chugging down Four Lokos like it was a gift from the party gods, but in our defense, college is about honing our decision-making skills, right?

If this is your worry, and I suspect it’s a common one (our parent’s generation tended to be leery of long-term OTC therapy), a little information can help you gauge how effective your caffeine usage is.

You want to feel alert, focused, and faster than normal.  If it were a “this is your brain on drugs” commercial, there would be a hyper-focused squirrel in the frying pan.  Caffeine is called a “stimulant” but it’s actually an antagonist–it blocks the adenosine receptor from receiving signals of tiredness and blocking up neural pathways.  Of course, too much caffeine and the results go haywire as too many pathways are opened up, leading to stress and confusion.

From a New York Magazine article: “Women generally metabolize caffeine faster than men. Smokers process it twice as quickly as nonsmokers do. Women taking birth-control pills metabolize it at perhaps one-third the rate that women not on the Pill do. Asians may do so more slowly than people of other races.” In The World of Caffeine: The Science and Culture of the World’s Most Popular Drug, authors Bennett Alan Weinberg and Bonnie K. Bealer hypothesize that a nonsmoking Japanese man drinking his coffee with an alcoholic beverage—another slowing agent—would likely feel caffeinated “about five times longer than an Englishwoman who smoked cigarettes but did not drink or use oral contraceptives.”

The second consideration is timing.  Research supports small, measured doses throughout the day rather than large amounts all at once that lead to a rollercoaster effect of peaks and dips in energy.  Those soldiers I mentioned chew caffeinated gum with small doses all night long, a technique researchers say could help civilians as well, if caffeine weren’t the cultural phenomenon it were.  Going out for caffeinated gum doesn’t have the same dating possibilities.

Third:  Get some sleep.

The rule of thumb to not drink caffeine after midnight drives me crazy.  Not one adult that I know has trouble falling asleep after a cup of coffee after dinner.  Trust your gut and use your common sense.  One-size-fits-all is nearly always a misnomer.