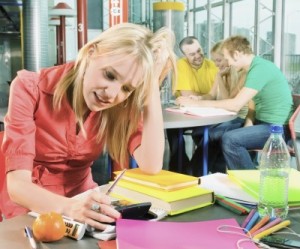 As the semester draws to a close and finals loom, grades are a pressing worry now more than ever.  Are the grades you’re expecting not as good as you hoped?  Sometimes it can feel that despite your best efforts, your classmates outpace you with seemingly less effort.

I know in my case my high school did not have a strong math or science department.  I tried (and almost failed) a molecular biology class my freshman year.  Aside from the horrifically boring nature of the course material (sorry, biology majors!), I found that I was significantly behind my peers.  That realization can be incredibly deflating, particularly as you venture outside your comfort zone after getting general education requirements out of the way.

If you find that the deflating feeling just won’t go away, be assured that there is actually a name for it.  It’s called the Big Fish Little Pond Effect (officially recognized by psychology professionals), and you are in good company.  The effect is a hypothesis that the self-concept of students is negatively correlated with the ability of their peers in school. In essence, how you feel about your academic accomplishments depend snot only on your own successes but is correlated to the relative success of those in the school you attend.

I choose to be reassured by this knowledge, and I think it’s something every freshman should be informed of.  In your high school you may have been in the top ten percent, but when you get to college you’re suddenly surrounded an awful lot of other top ten percenters.

As long as you are trying, even though it may be of little comfort to you at the moment, you will likely experience the Pygmalion effect, which refers to the phenomenon in which the greater the expectation placed upon people, often children or students and employees, the better they perform. According to Wikipedia, “the effect is named after Pygmalion, a Cypriot sculptor in a narrative by Ovid in Greek mythology, who fell in love with a female statue he had carved out of ivory after it became human from his wishes.”

In other words, your classmates are likely experiencing the same feelings you are as you all struggle to get through a tougher course load.  All that work has a way of exposing weaknesses, but your own are likely to be magnified.  But according to the Pygmalion effect, the harder you work the better rewarded you will be in the long run!