With the ever growing social network Twitter on the rise, eCampus.com decided to take a look at who holds the most influence. From music to television to sports, these followings are quite impressive. We all know that Kim Kardashian, Katy Perry, and Lebron James are well known, but did you realize that combined they have the ability to influence over 36 million people?!

Take a look at the numbers of the biggest influencers on Twitter in music, sports, and television in the infographic below.  To see the full graphic please visit the eCampus.com Library of College Infographics. 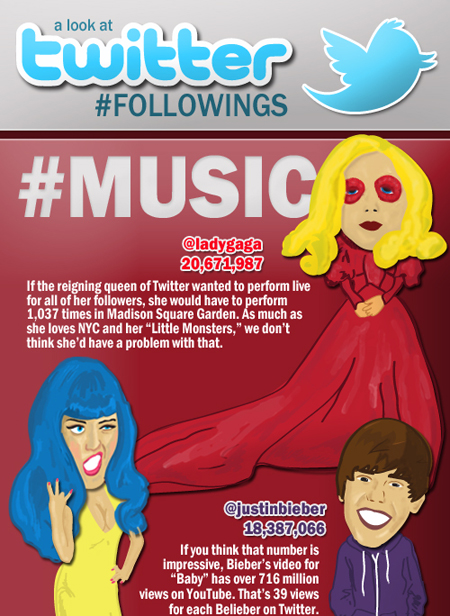 New Years Eve- the time when people party so hard, they wake up the next day and make drastic changes to their life to make up for the debauchery that occurred the night before. New Years Eve is the best time of the year to party, have fun, and celebrate the past years triumphs. People all over the world party hard on New Years Eve. From India to Brazil to Japan to Iceland, New Years parties will be in full swing, with cultural traditions being the only difference in the celebrations. For the first time in a few years, I have no New Years plans (I should really start using Facebook). I decided to research some fun things to do across the U.S. in search of plans for the ultimate New Years Eve. I’ve compiled a list containing concerts, parties and events. Check it out:

1. Dick Clark’s New Years Rockin’ Eve with Ryan Seacrest. This is based in New York City, but there is also an L.A.event under the same name with different performers. This concert began in 1972, and it’s been a huge event every year since. If you like pop music, this concert is where you want to be. It’s in New York during the biggest party of the year. Performers include Lady GaGa, Justin Bieber, Pitbull and Hot Chella Rae. The hosts for this event are Jenny McCarthy and Fergie. This will more than likely be the biggest event of New Years, based on the amount of people who travel to NYC every year.

2. Together As One, Orange County,CA. This is like the ultimate rave, including performers Duck Sauce, Diplo, Bloody Beetroots, Chromeo, and Felix the Housecat, among others. This event is sure to be packed with partiers who will be ready to bring in the New Year with a bang.

3. PHISH at  Madison Square Garden, NYC, NY. Attention all hippies: find your way to New York for this four-day PHISH concert, which will rock from December 28th through New Years Eve. It’s been sold out since shortly after tickets went on sale, so this is sure to be a BIG concert.

4. BASSNECTAR Nashville, TN. This show is set to be HUGE. If you like dubstep music, then this is the show for you. Be ready to make your ears bleed.

1. New York City– The dropping of the crystal ball in Old Times Square is a gigantic event every year. People from all over the East coast and beyond gather in New York City for this event, making it among the most popular New Years destinations. It’s a tradition that has been going strong since 1907. I can’t imagine what New Years Eve would’ve been like during prohibition. You can buy your all-access party passes here.

2. New Orleans– Bourbon Street is the place to be year-round, so you can imagine what it’s like during New Years Eve. INSANITY. Most people realistically just can’t handle Bourbon Street, let alone during the craziest time of the year. Watch the ball drop at Jackson Square, and partake in adult beverages in any of the twelve million bars along Bourbon Street. Check out what’s going on in New Orleans on NYE here.

3. Seattle– I’ve heard from many people that Seattle turns into a city-wide party on New Years Eve. The Space Needle is turned into one big fireworks show, and besides that, there are many, many things to do in Seattle during New Years Eve. Check out the 35+ bars around city centre if you get thirsty. This isn’t quite like the other places on the list, so I understand if you are skeptical about this one, but you have to trust me. Seattle ROCKS on New Years Eve.

4. Las Vegas– Vegas and New Years Eve go together like chicken and waffles. Imagine a place where the party never stops. Literally it never stops, as there are no “last calls” in Vegas. Most cities force bars to close anytime between 2 and 6am, but not in the city that never sleeps. Check out the strip during New Years Eve, and you may begin to understand why it’s called “sin city.” One extra bonus about Vegas around New Years time is that you can bet on any of your favorite football (BCS) bowl games. Check out other NYE Vegas events here.

Are you guys music buffs like we are here at the eCampus.com headquarters? Well if so, be sure to check out the 53rd annual Grammy Awards airing this Sunday!

It was announced the other day that music legend Bob Dylan will be performing at Sunday night’s show alongside Best New Artist nominee Mumford & Sons as well as the Avett Brothers.

According to the L.A. Times music blog Pop & Hiss, Dylan will take part in a multi-song suite that will include Mumford & Sons’ “The Cave,” followed by the Avett Brothers’ “Head Full Of Doubt, Road Full Of Promise.” Once the two folk-groups finished, Dylan will finish the medley with one of his own songs.

What do you guys think about that lineup? Who will you be pulling for? Will you tune in? Leave a comment and let us know!

For a full list of this year’s nominees, check out the Grammy’s official website. The awards air Sunday February 13th on CBS at 8pm.

On Sunday September 12, 2010 MTV aired the Video Music Awards. Chelsea Handler hosted the 26th annual VMAs in Los Angels, California. The evening began when stars flooded the white carpet, some looking their best, and some not so much. Guests included major celebrities like Lady Gaga, Drake, Kanye West, Taylor Swift, Justin Beiber, Usher, Nicki Minaj, Eminem, Trey Songz, Katy Perry, and the casts of The Jersey Shore and Glee. The night was full of awards and Lady Gaga. Fans went gaga for Lady Gaga awarding her eight VMAs, the most of the night. Eminem was awarded two awards for Best Male Video and Best Hip-Hop Video.

Although awards were given and performances rocked the room, critics might say that the night lacked drama. It didn’t have a “moment”. I guess there is always hope for next year.

The best part of the night could probably not be put into one moment. Maybe it was the three different, uniquely interesting, outfits that Lady Gaga appeared on stage in.

The best performance of the night was Eminem singing his hit song Not Afraid and then being joined by Rihanna to sing Love the Way You Lie. Chelsea Handler’s host job was not getting rave reviews, some saying that a few of her jokes got old and were offensive.